Three goats lay in the hay on the barn floor, chewing their cud, while nine hens cluck around them.

The hens love the barn in the winter for the light from the clear plastic roof, and I’m watching them while the Bearded One is over checking the rat traps on top of the chicken coop.

LaLa chews side-to-side with his back molars.  I can see the clean white row of front bottom teeth and then he stops, pauses … as if he’s heard something.  He swallows, and a lump the size of an egg travels down his throat.  Leah flaps and pecks the hay.  LaLa ignores her, burps up another wad of hay which I watch travel up his neck, and then he starts chewing, side-to-side, again.

Leah is at the end of her moult, and is less scraggly than she has been.  So is Sweet Tart.  Moulting hens don’t lay, but I am pondering the fact that none of our hens is laying.  We had a tiny fraction of our usual eggs in September and no eggs for the entire month of October. 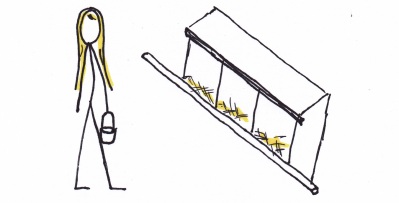 Hens need fourteen hours of light to lay eggs, and right now, in mid-October, on the 47th Northern Parallel (that’s north of Toronto and Montreal, Canada), we have about ten.  Plus the sun is low in the sky and blocked half that time by surrounding forest.

So we’ve started extending their light exposure by leaving a light bulb on for a couple of hours at both ends of the day — as we did last year with success.  They seem to just sleep right through the added light.  We hope to get the gals laying again soon.

I know I could drive into Gig Harbor and get a dozen eggs, but my seeming snobbery about the wonderfulness of our own home-grown eggs has become considerable.

Eggs aren’t essential, for heaven’s sake.  I love to bake cakes and cookies, and the Bearded One likes eggs for breakfast once a week or so.  We are mainly oatmeal folk now, to the Bearded One’s slow acceptance over time.  Still, we’ve had so many fresh beautiful eggs these past two years, we’re a bit spoiled.

The Bearded One is over in the aviary (the chicken coop is inside the aviary) up on a ladder and shouts good news from the site of the rat traps — no birds, no rats, no rat droppings — and then he gets buzzed by a bird coming down the ladder and yells, “Whoa!  There’s a blue jay in here!” 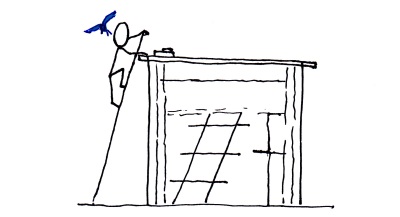 Garfield has noticed this also and as I approach, I see him climbing the corner post of the aviary.  A small Stellar’s Jay — powerfully, vividly blue with a black head — flutters around Garfield’s pole, panicking, even though Garfield can’t get to her.  The jay gets caught in the chicken wire reinforcement about halfway up the wall of wire and is flapping hard but making no progress.  Birds usually get into and out of the aviary with no trouble.  This bird seems young.

“Get some gloves first!” shouts the Bearded One. Garfield has leaped up onto the wire just below the ever-more panicked bird.  She must be stuck.  I run back to the barn for the gloves, because wild birds and bare hands aren’t a good mix, and when I return, Garfield is like a horror movie showing against the aviary wall, glaring at the jay, vocalizing furiously.  The bird is wild now.  A bluejay tornado.

I reach up and down between the overlapped layers of fencing and pull the bird out, sacrificing some underbelly fluff and feathers.  I don’t know if her wings or legs have been hurt.

Garfield has made his way back along the edge of the aviary, so I walk the other direction to the gate post.  I set the jay on the top of the post and let go.

Immediately she flaps hard and flies off to the northeast, the same direction as the trapped owl I released back in the spring.  Both times it feels like a blessing on this place flown in from deep in the forest.  I gasp with relief that she’s not hurt, with the thrill of touching her small body, and with the sight of her escape.  No more cats for her. I smile.

As if on cue, seven hens in a tight bunch come marching around the main gate and into the aviary all at once.  Straight into the chicken coop.  Maybe we’ll see some eggs tonight. 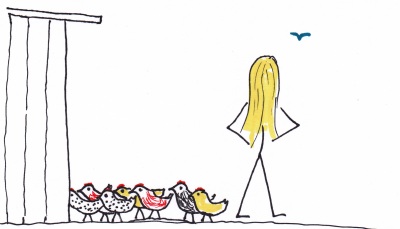