Our neighbor stops in his bumpersticker’d Ford pickup truck.  He’s coming home after planting signs for his local political candidate.  He’s in his late 60s, he laughs a lot, he likes to talk about critters, and he is a Minuteman, guarding the border.  “Howdy, Neighbor,” he says. 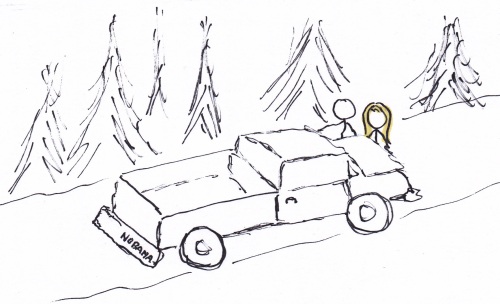 “Oh, you know,” says Minuteman, looking wistfully down our dirt road — itself once the subject of politics and majority rule (pavers vs. non-pavers). “Politics these days is a Rat Race.”

“I completely agree,” I say.  Minuteman and I are in opposite political camps, but we often agree, and when it comes to local issues, we’re both non-pavers.  A dirt road is good for the rural soul.

There are no cars coming, so Ruby, aka Elder Dog, decides once again that she is retired from commands.  She’s well into her 70s in human years.  She stands up out of the required sit (a transition to going mobile…) and the Bearded One makes her sit again.

Talk turns to the raccoon invasion.  “I got that newspaper article you emailed me,” I say, referring to the raccoon story of the week where a local woman was attacked by a pack of raccoons as she walked her dog.  She was hospitalized briefly.  A crazy, rare occurrence.  Scary.

Minuteman shakes his head.  “We’ve trapped and released 6 or 7 of them,” he says.  “They’re after the hens’ eggs.”

The Bearded One and I both picture our flock of 5-week-old meat birds, which any raccoon would love to eat.  We’ve lost just one this week, to the standard mystery sickness.  All the rest — 26 — are still spry.  They are big and heavy like grown egg layers already. 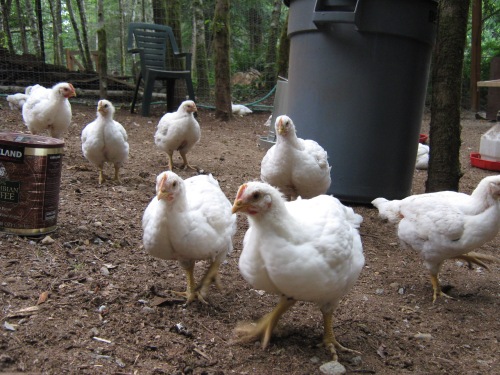 I say,”I saw the picture on your Facebook wall,” and Minuteman laughs, “Yeah, last night we trapped somebody’s cat.”

A car is coming, so he waves good-bye.  Then we talk to the neighbor in the oncoming car about her 5 feral cats and how she fears that she is feeding the raccoons more than the cats these days.  This local raccoon story has caught everyone’s eye.  Soon we are walking again.  Ruby has just about had it with all the road talk.

I want to talk about politics and the voting coming up.

“The goats vote,” the Bearded One says, “and LaLa always loses.”  It’s true.  In their herd of three, Pearl might be the only female and thus the technical boss according to goat lore, even though she has had no babies, but it appears to us that she has power because she teams up with a her sibling, Sage, who is the biggest.  They are definitely all for democracy.

We head home and the Bearded One goes straight to the tool shed area where he has been splitting wood and making winter kindling packets all week.  Bumble bees have taken over the nearby woodpile he’s been working on.  The Bearded One has been trying to convince them to leave, raking out their piles of moss, cussing at them.  He’s not having any luck. 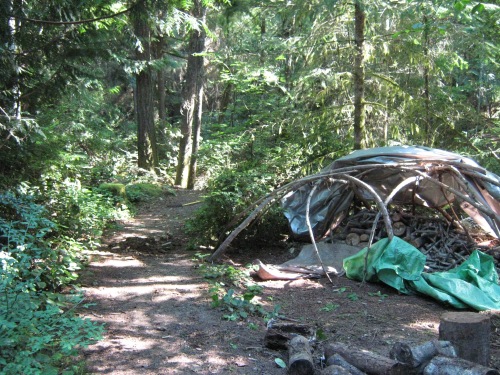 Tractor trail and the covered woodpile where the bees live.

“I think their queen died when I tore up the colony,” he says.  “The drones and workers don’t have a clue without her.  They refuse to leave.”

The Bearded One is stunned and walks over.  Before my very eyes, he points and speaks in bee language.  “CDB?” he says, and sure enough, there is a bee, then another, and another.  They’re everywhere, just at ground level.

Later that afternoon, I’m at the computer when the Bearded One comes in rubbing a hurt spot on his leg.  “Four raccoons just walked up on me bold as you please,” he says.  “A mama and 3 babies.  I yelled at them, but they just kept coming.  Right down the middle of the tractor trail.  No particular fear at all.”

He nods and continues.  “I had to act super aggressive just to get them to stop and climb a tree.  I ran up on them hissing and yelling and waving a rake.  I stood there reading them the riot act, trying to imprint on the babies to fear people.  Until suddenly I realized their strategy in one hell of a hurry.” 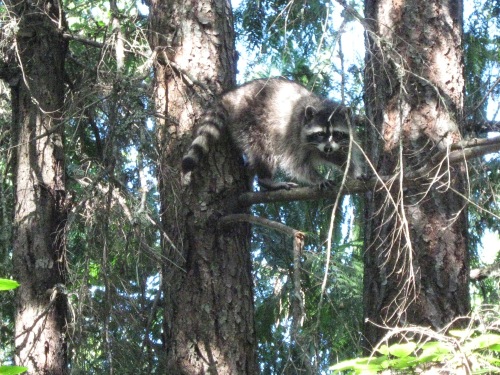 “I was standing right in the middle of the bees.”

NEWS FLASH:  Here’s a new west coast review on one of my recent books, a novella called A BEAR TALE. http://brianrushwriter.wordpress.com/2012/07/18/a-bear-tale/ 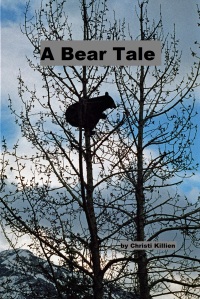