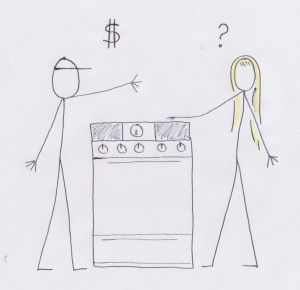 Tom is here disconnecting the old stove that came with this house, and installing a longer propane line and an electricity box for the new one we bought, which is being delivered this afternoon.

The windows are open as they always are, and we can just hear a bulldozer rattle and clank down the road.

Last year I was pioneer woman breaking new ground, moving to Hawaii, living off-grid, baking dozens and dozens of cookies in an all bus up stove. This year I’m getting a new stove.

All bus up is my favorite Pidgin phrase. When we bought the house, we tried to make their lawn mower and string trimmer part of the deal. The seller said, “Sure, you can have the mower, but the string trimmer is all bus up.”

I love how it sounds, how it makes me smile when I hear it again. Lawn-mowers, string trimmers – all bus up! Store-bought eggs, all bus up! This ancient, rusted stove is not literally all bus up, but it’s pretty far gone. There is just no way it’s worth anything. I would feel guilty even giving it away on Craigslist.

The Bearded One and Tom almost can’t get the stove out because of the window ledge.

It must have been here for at least 20 years, since the house was built. And now, it’s in the middle of the kitchen floor. Rusted sides, one lone non-sooty functional burner, a long-stopped clock (6:30), and a choking brown dust layer on the floor beneath the oven.

Bulldozer treads bang in the distance, metal plates on solid rock. There is no soil here. Not 8/10 of a mile from the ocean. This 500-year-old lava is virtually brand new. Pahoehoe (puh-hoy-hoy) lava flows pile up, and composting takes eons. I’ve watched the bulldozer work. A brown man in a bright blue shirt drives the bulldozer back and forth, over and over and down and around the bus up lava rock, grooming it to build, breaking it down into workable size chunks for altering the rough landscape into a big pool table.

This is not how our place was done, by a long shot.

I set to work cleaning the floor and wall and anything else that needs it as I wait for the promised phone call from the Home Depot delivery man saying, “We’ll be there in half an hour.” The Bearded One doubts it’ll all work out as promised. It rarely does here.

Finally the phone rings. It’s them! What? The man who was supposed to convert the gas jet to propane didn’t get the message?

He will do the conversion on Monday? They deliver to the other side of the island on Tuesdays. Wednesdays they don’t deliver. She apologizes, but the plan is all bus up and we won’t get our new stove until Thursday, five days away.

“No stove for five days!” I say to Tom a few minutes later. I hang my head. “What I would give to have the old one back.”

He smiles. “It’s already hooked up. I just used your new connections. You can have it back now.”

I laugh, deeply relieved. It’s still working. Kind of like the whole world. Even if it’s all bus up. 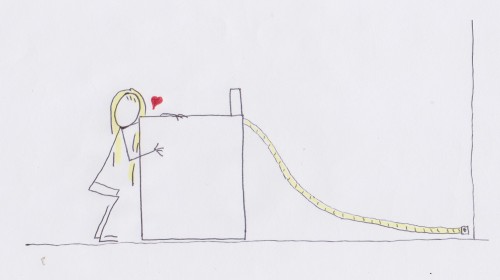 Now he is taking a break, munching on a juicy red fruit the size of a cherry tomato from the enormous bush beside the barbecue. 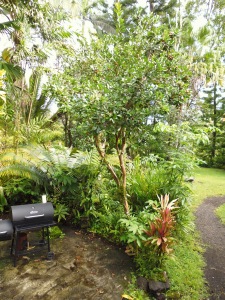 “Yes,” I say, “ono!” I’m drinking a glass of water on the hot lanai, after sweeping termite poops into corners all day.

“Strawberry guava,” I add, thrilled that I not only know that “ono” means delicious, but also what these recently ripening lovelies are called. “I just learned their name.”

Akamai (Ah-kah-MY) means “smart” in Hawaiian. I am trying to learn some Pidgin, the language that evolved here so the immigrating Japanese, Chinese, Portuguese, Filipinos, Americans and the Hawaiians could do business.

It’s rarely appropriate for a white person, a haole (HOW-lee), to try and speak Pidgin, but frequently helpful to understand at least a little bit of it. It’s beautiful and melodic and I’ve loved listening to the workers speak it to each other all day.

“I heard that they’re considered an invasive species,” I say.

These remote islands have very few native species. Everything migrated here at one time or another. Still, some species are just more invasive than others – like these strawberry guavas which threaten other plant species with shade-casting thickets and dense mats of surface feeder roots. Mongooses, mosquitoes, coqui frogs and gigantic albizia trees are all non-native invaders.

Akamai laughs, his smile charming, and eats another of the sweet treats without a bit of guilt.

Our friend Tom says that to see the highest impact invasive species, just look in the mirror.

Humans are the main invasive species in Hawaii by far. I’m particularly aware of this, of my whiteness and newness, and I want to join in, not invade. So I am honored that Akamai hangs out with me during his work break.

This week we’ve had lots of deliveries, and I try to be a good haole. 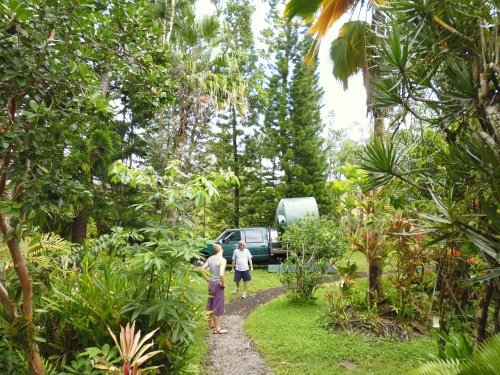 The catchment tank guy, a huge Hawaiian man who helped the Bearded One and His Majesty roll the 1550 gallon tank around the side of the house, wouldn’t accept a tip.

Two guys, one white, one Hawaiian, delivered the big generator that goes with the solar system. They accepted a handful of Hershey’s kisses.

All were kind and interested in what we are doing, being off-grid. HELCO power connections can be had even here. It costs $7500 just to tie in, we tell them. By the time we put in cables and trenches and conduit and paid official electricians, we’d easily be in the $20,000’s. Plus years of the highest electricity rates in the nation. Hawaii’s average rate is around 38 cents per kilowatt hour. More than triple the national average. So it’s not surprising that there are so many people open to solar here.

We show them the system we are designing, the 9 panels on the dining room floor, the boxes with the inverter and other components, and the 4 expensive batteries.

The Bearded One built a plywood and recycled shutter box to protect them from the elements. It’s tucked neatly under the house. Now we have the final piece, the propane generator backup. All this, for about $7500.

Tom and our son hope to help install the system this week, and maybe even Akamai, since he is so good working on roofs. Presuming, that is, that the roof is dry.

Akamai looks up from under the towering strawberry guava bush as the Bearded One walks toward us from around the side of the house. “Brah,” the young man calls out as he waves to my haole husband.

The Bearded One smiles. Brother.

Later, I jokingly congratulate him on getting his first brah.