“It’s not over yet.”  The Bearded One is in a wee contest of wills with our three Pygora goats, and he has just reported their continued strike status — boycotting the new feeder he made.  “I’m not pulling it,” he says.  “Damn goats.”  He’s making new feeders to try and stem the huge amount of waste.

We are just sitting down to lunch, chicken soup and chicken sandwiches with fresh broccoli which the garden is still cranking out, our best crop of the year.  I assure the Bearded One that the new feeder is magnificent.  It’s in the corner of the barn, though.  My guess is that the access is too narrow, only 90 degrees versus 180 degrees like the old one which was against a barn fence, and the goats feel vulnerable to each other.  The feng shui (pronounced fung shway) is bad.  The Bearded One snorts and slurps his soup.

We’ve had goats for nine months now, and we’ve watched them eat.  They are picky and messy and they don’t like change very much.  And this week, the Fall Equinox, the pasture has been seasoned with rain so we’re not just dumping a flake of hay out there on a dead bush anymore.  There’s even more waste when we do that, anyway.  At the feeders goats yank and grab at hay aggressively.  Vast clumps fall away forever into impurity.  Once on the ground it’s bedding.

The Bearded One thinks that the problem with the new feeder in the barn is that the goats won’t pull the hay through the 4″x6″ holes in the wire.  The old one had bigger 6-inch squares.  Its problem was that it was too high up off the ground.  You don’t want the goats to have to reach up and get little hay flecks in their eyes.  They also beat it to heck by climbing up on it with their front hooves.

He describes this to me over lunch, and I try to pay attention, but I’m thinking of making our own environment more wonderful for the long, dark, wet winter.

Our feng shui issue is color.  For the past three years now, as the days start getting shorter than the nights, I’ve been painting the old white walls. Two years ago it was Wheatfield yellow in the kitchen, and Somerville Red in the kitchen nook and stairwell.  Last year I turned the upstairs bathroom into a gorgeous Townsend Harbor Brown cave, and two walls in the living room and two walls in our bedroom got Desert Tan.

Now I’ve seen the color I want to add this year.  I want to taste it it’s so beautiful.  It’s the coral of a Tucson sunset, and I’ve taped the photo that inspired me on one wall in the downstairs bathroom and on one wall in our bedroom.  The paint color I found is Pink Peach.  A little fire to balance all the rain. 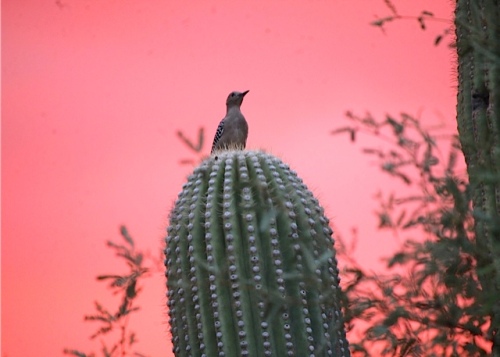 “When they get hungry enough, they’ll eat from it,” the Bearded One says, but he’s grinning.  His tummy is full and he heads back up to the barn to work on yet another feeder design.  We’ll end up with two indoors and one outdoors in the covered breezeway.

Of the three goats, LaLa is the lesser somehow.  Pearl is the only female, which gives her power, and Sage is the biggest.  Pearl and Sage are also siblings, if that plays into the complex goat social structure.  There’s a lot of pecking order stuff.  LaLa is the last served and the first finished.  He has to be since he is usually not allowed at the hay when the other two are there.  He is butted and slammed and shoved at various points throughout the meal.  Still he retains a good humor evidenced by his prancing and gentle return jabs, but he always ultimately defers.

Lately LaLa has even been letting me pet his whole body.  Pearl and Sage watch as I coo and stroke the soft black mohair, happily massaging LaLa’s bulging sides and hobbit ears.  If this rankles Pearl and Sage, they don’t show it.  It’s a LaLa thing, they seem to be saying.  It’s all he’s got, poor bugger.

Hours later, I go up to fetch the Bearded One for our evening walk.  The Old New Feeder is gone.  The New New Feeder is installed and I get a tour.  Each goat has always had its own dry cob bowl, but now each has its own hay feeder, too.  The corner feeder is still there, but it is lower now and has 6-inch holes.  The old feeder against the interior fence has been replaced and lowered, as has the third feeder in the barn breezeway.

The Bearded One gives them a bit of dry cob in their feeder bowls and then they charge out to Goat Mountain for a goat rodeo.

Incredibly, LaLa climbs to the top and Sage and Pearl let him, unchallenged.  They stand beside LaLa and look at us, clearly pleased with their lot.  We take their picture, a fine portrait that could end up enhancing our den.

I smile and say, “Nothing like a little feng shui with your hay.”