If You Give a House a Bed

We are Robert the water guy’s next to last delivery. It’s almost 8pm, we’ve got spotlights on the side of the house, the Bearded One is opening the gate, and I’m standing at the window holding our new kitty, Nala. 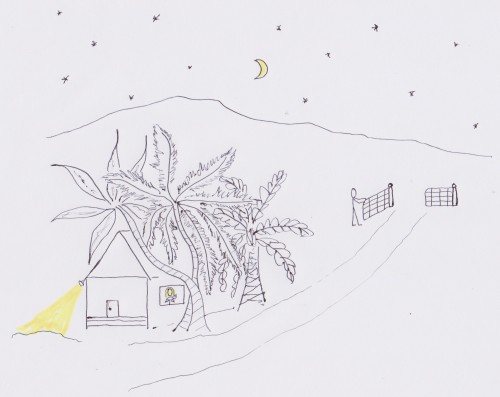 “Mew,” she says, her eyes nocturnal and wide. She wants to watch, too, but is a bit nervous about all these lights. She is comforted just by hearing the sound of my voice, that I am not concerned.

She wants me to tell her a story as we stand here, looking out at the road, the driveway, and the huge pile of bedding soil dropped off earlier in the driveway, a tall pile that looks in the dark to be pointed like a witch’s hat.

I remember a favorite bedtime story of our kids – If You Give a Moose a Muffin – and riff on it for my kitty.  “Okay,” I say, kissing Nala’s soft head. “This story is called, “If You Give a House a Bed.”

“If you give an old hippy house a huge pile of bedding soil outside, it’ll want a real inside bed (not inflatable) as well. So you’ll drive into Hilo and buy a Serta Perfect Sleeper queen-sized bed, box spring and frame.

When the bed is delivered, the hippy house will want another one for guests. And then another for the den. But it’ll settle for a couch in the den, one that clicks down into a full-sized bed, so you can watch an occasional Netflix, and also for guests.

And when this old hippie house’s rooms are all full of beds and couches, it will ask where the washer and dryer will go. You’ll have to trek to Hilo again to buy some concrete and order wood for a free-standing outdoor deck to put the washer and dryer on. Might just vibrate the old house apart, otherwise. 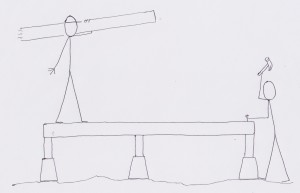 When you’re building the deck, that old house will notice how dusty and dry the road and yard are getting in the record-breaking heat and drought (9 inches behind normal rainfall for the year and 10-15 degrees hotter for the winter). The dust will remind it of the last El Nino and it will think about what a crazy year it’s been with hurricanes and lava eruptions and now drought.

It’ll ask you to check the water level in the catchment tank. It’s scary if it goes too low. When the old building sees there’s just a foot left, it advises you to order a water delivery to keep everybody happy. $140 for any amount up to 4,000 gallons. The 1550 gallon tank is starting to feel downright tiny. 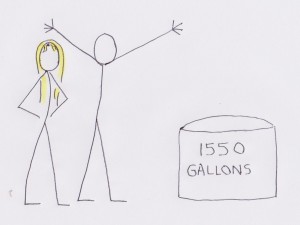 Out in the yard, the hippy house suddenly notices the perfect spot for a second catchment tank, so you won’t have to keep paying for water. It tells you to put an ad on Craigslist for a jackhammer man to clear the lava rock from the spot.

And then it remembers how dirty you get working outside, so the old house, excited and on a roll, insists on an outdoor shower on the deck next to the washer and dryer. It’ll go measure. We’ll need to buy some redwood to build the shower.

Meanwhile, you go inside for a glass of filtered catchment water from your new Berkey water purifier, and sit on the couch/bed. The hippy house is feeling very homey. All it needs now is a cat.

Just then, your son calls and asks if you would like a beloved, tame, gorgeous 7 month old cat named Nala, whose mother is pregnant again. You say, ‘BRING HER!’”

Nala meows fiercely, and I pet her some more. I hear the heavy water truck coming up the road, unmistakable in the night silence. It’s pitch dark. The stars are popping. Time to wind up the story. “Yep,” I say, “chances are, if you get new beds, inside and out, an old hippy house is going to want at least one cat to go with them. “

Tagged Cats, commitment, drought, El Nino, feeling at home, Hawaii, If You Give a Moose a Muffin, water catchment systems