There’s barely enough room for the two of us, woman and dog, in the shower.  I kneel on a hand towel which blocks the drain.  Ruby sits and leans against the wall while I work to adjust the water temperature and soak her with the hand-held shower head. 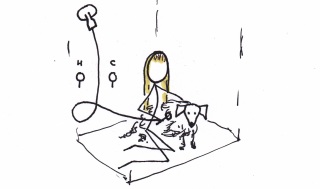 Golden Retriever hair lays flat and repels water like Goretex, which keeps the dog warm in the 50F degree waters of Puget Sound, but it is near impossible to get wet in a human shower.  I have to pull it sideways to find any skin.  Ruby loves it.  She may be twelve-and-a-half, but it’s me who’s getting too old for this.

My hip is already starting to protest, and I keep bumping the water handle from freezing to scalding hot lava.

It’s been almost five weeks since I bathed the dog, and that’s not because she struggles or gives me any grief.  She freely walks into the shower when I have everything ready, or think I do.

“Sweetheart!”  My voice echoes around the walls and over the top of the shower door, out of the bathroom and through the den into the living room where the Bearded One lays towels on the floor and readies the hair dryer next to the rocker.  “I forgot the little white ear rag!”  I have to trust that he can hear me since I can’t hear anything with the water running.

Ruby cringes.  My voice is loud and Ruby is close to deaf, but she can feel my agitation. This is supposed to be a time of comforting, not a chore to endure. She’s been off her food for a couple of days, and this morning she turned down cat treats.  Even Garfield has noticed and has taken to following us on walks, at least for a quarter mile or so, herding Ruby.  This could be her last bath, I think.  She is slowing down. 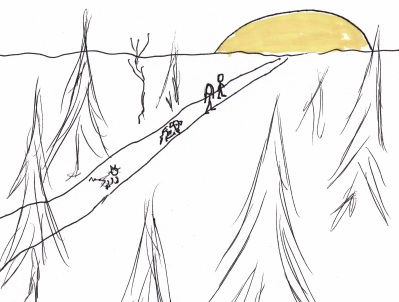 “One soft little white rag,” the Bearded One says and drops the tattered cloth over the top of the shower door.

“Thank you,” I say tightly.  Then I reach up to turn off the water.  My knees press into the drain as I slide Ruby’s fifty-five pounds of hunkered-down dog around like a bean-bag chair.  I can just reach the shampoo.

It’s a new bottle and I can’t grip the slippery teeney tiny tab on the safety seal to open it.  “Honey!” I yell.  “Please help me get this DAMN shampoo open!”

The shower door opens a couple of inches and I hand the bottle out.  The Bearded One hands it back, opened.  Surely he must notice how pathetic we look, old, deaf, soaking wet and sitting in the swirl.  The door closes and I massage a handful of shampoo into Ruby’s hair.

Then the Bearded One walks back into the bathroom.  I can just see a shadow of him through the textured glass door.  He’s carrying something, and he appears to be sitting down on the toilet seat with it.

There’s a lay-dee who’s sure….

He plucks his guitar, the first six notes of “Stairway to Heaven,” which he is learning to play and knows that I love.  He plays the little intro again — it is all that he knows so far — and I laugh and shiver with delight — and then he moves on to his usual repertoire starting with his own masterpiece, “How I Miss You Baby.”

Ruby can’t hear it, but she gets the pleasure through my hands.  I gently scoop wax from her ears as I listen.  I massage her old body and she leans into my naked belly.  I focus hard on trying to make her feel good.  “All that glit-ters is gold,” I sing softly, “and she’s buyyyyying a staaaairway to heaaaaven.”

Then, after I finish and the Bearded One towels her off, she trots out the open front door and down her own stairway, 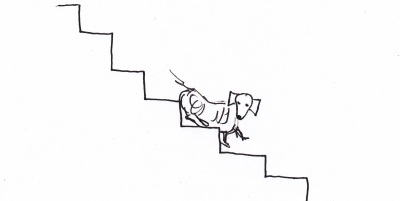 and into the backyard to roll happily in the brown grass like a puppy. 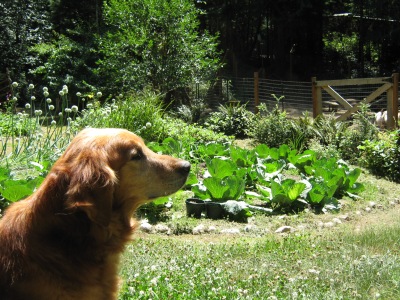 34 responses to “Hairway to Heaven”