Ruby starts a nervous rhythmic licking in her bed, which is right next to the couch where I read.  Lick lick lick lick lick, her tongue shoots out like a snake.  Air licks.  Very loud.  She’s a mostly deaf twelve-year-old Golden Retriever and she can’t help starting these tics.  But she can stop.  I just have to catch her eye.

It’s early and she’s nowhere near ready to get up.  She usually stays in bed until the tens, and then when I’m cooking and the Bearded One is reading the newspaper, she peeks out from her bed under the stairs and rises.  It’s the same most every day — a ritual.  Front paws extended, she stretches, then the back legs.  Then she shakes.  “It’s Miss Ruby!” sings out the Bearded One.

But that’s still hours away.  Now she’s in a sleepy trance that I hope I can break without getting up, dang it.  Lick lick lick…

“Ruby!” I whisper-hiss, because the Bearded One and His Majesty are still sleeping, and then I start waving.  I know she can’t hear, but I say her name anyway.  I wave wildly.  Sign language is the way in, but her eyes are getting a little cloudy lately and movement really helps get her attention.

Most every morning, after the Bearded One officially greets Ruby, she wags her tail vigorously (she adores the Bearded One) and walks over to the couch where I now sit, and where we congregate for the singing of the ritual morning song.

Good Morning to You!
Good Morning to You!
We’re all in our places
With sun-shiney faces
And this is the waaaaaaaayyy
Ruby starts a new day.
Ahhhhh — MEN.
Both the Bearded One and I were raised in Protestant Christian churches where we all sang a prayer song called the Doxology, so, of course, we call this morning ceremony the Dogsology.

We pet Ruby vigorously as we sing.  It’s a love fest.

Garfield recognizes a good thing when he sees it and wants in.  He’s usually back in bed by ten, but he gets up and comes running.  It’s very rewarding.

His Majesty, our 22-year-old son, he who is building a new back deck, likes to attend as well.  And this past weekend our daughter the nurse was here and she sang along and then said, “You guys are religious!”

The Bearded One and I both laughed at her word choice — we haven’t been any religion for decades and didn’t raise the kids in one.  We’re not religious, we’re just getting older, like Ruby, and appreciate a good ritual.

Ruby has finally spotted my wild waving and, in shock, has momentarily stopped licking.  We are almost there.

I point my index finger at her with authority.  “NO LICKING,” I whisper loudly.  I shake my finger and lead her to focus on my scowling face and register the seriousness of the issue.  I have her attention.  Now to connect it to the licking, or at least break the pattern.

She stares at me.  And licks.  I shake my finger.  She licks again.  And again.

Her huge ears are cocked up and she looks downright precious as she tries to figure it out.

I shake my finger and point at her tongue.  I scowl.  I send the message telepathically — NO LICKING.  YOU ARE DRIVING ME INSANE.

I love this dog.  She isn’t cuddly like her brother Jake was, but she is an endearing collector of gloves and shoes and chunks of wood, all of which she piles up in special spots around the back yard.  This week she carried one of the Bearded One’s flops out of the man cave den, back through the living room in plain sight of us in the kitchen, and out the screen door.  We were howling with laughter.

After dinner we found it near the sweet pea teepee, which I just fertilized with fish fertilizer, a smell that could rouse Jake from the grave to dig and roll in.  I’m sure Ruby noticed, but I’m equally sure she resisted the temptation.  She’s old and knows better.  Heck, she even knows she’s not allowed in any garden.  I’ll miss this when she’s gone and we have to train a new dog.

I hope that’s still a couple of years away. 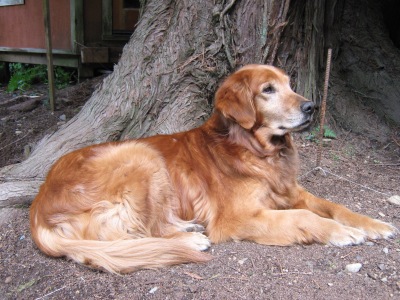